On Sunday, January 20th, I was one of the select few selected to enjoy brunch at Back Deck Boston, courtesy of the Boston Brunchers.
Now, I know that brunch is all uber trendy and the "thing" to do, especially on a Sunday, when you've been partying all weekend and your liver is screaming at you to just knock it off already.  There is something to be said for the hungover genius that invited brunch and brought the best of breakfast and lunch together for one meal.


Back Deck Boston is located on the corner of Washington and West Streets in Downtown Crossing.  This bright, light restaurant is decorated to invoke the feeling of relaxing in a friend's backyard on a warm summer night.


Their brunch is a good balance of fare, focusing on the restaurant's theme of using a charcoal grill to prepare their foods.  I was especially excited by the bar menu, including several drinks that sounded delicious. 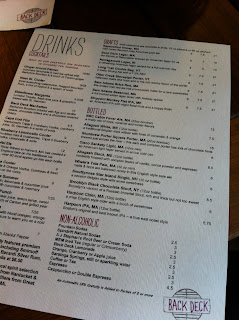 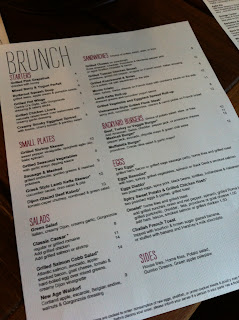 I started off with a Bloody Mary, because let's be honest, no brunch is truly complete without one.

Back Deck makes theirs with Absolut Peppar, which give it just the right amount of HELLO to your palate.  Nice way to wake up those tastes buds from their slumber.  I prefer my bloody Marys made with GrandTen Distilling's Firepuncher vodka, but Back Deck's version was perfectly delicious. 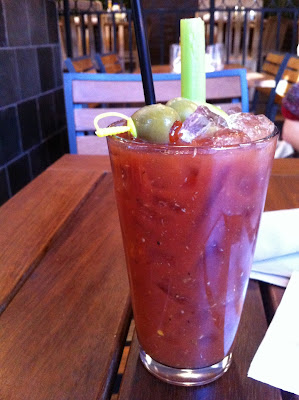 With ten girls there for the brunch, we made the exceptionally wise decision to order a bunch of appetizers for the table to share.

Chicken livers with watercress salad - I'm not particularly fond of livers of any sort (with the exception of liverwurst pate from my Polish store), however these were flavorful and the lightly-dressed watercress salad was a fresh compliment. 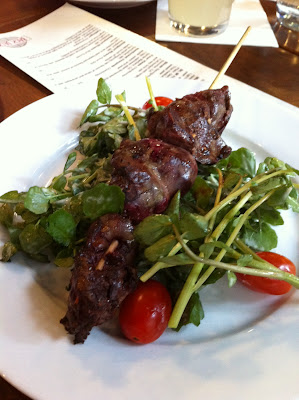 Grilled pink grapefruit, drizzled with honey - Without a doubt the most unique appetizer on Back Deck's menu. The honey, along with the grilled preparation balanced out the tartness of the grapefruit.  It was exceptionally juicy, but was hard to eat given the softness of the pulp. 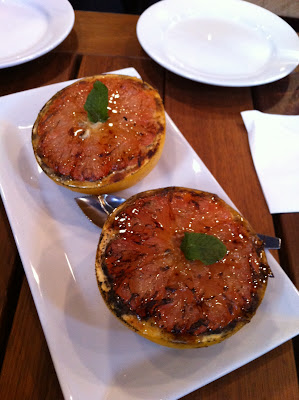 Creamy Eggplant Spread - While tasty, this dish was not "eggplanty" enough for me.  I craved more eggplant mixed in to balance out the overwhelming flavor of the cream cheese. 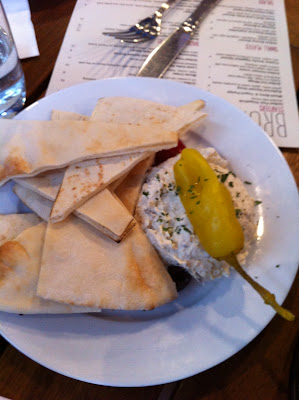 Grilled vegetables with garlic aioli - a fairly standard offering for an appetizer.  The Brussels sprouts were great though.  But let's be honest here, when are they ever not? 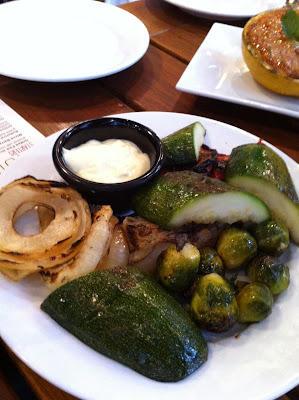 Butternut Squash Soup - topped with sour cream and pipitas (pumpkin seeds), this soup everything you'd expect.  Thick, warm, comforting, and very delicious.  Perfect for all these cold New England days we've been having. 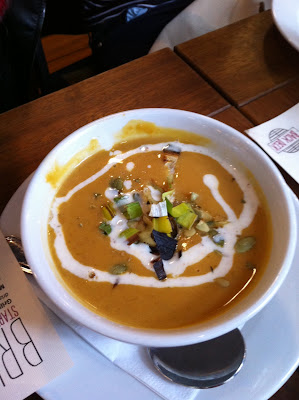 Next, we were on to entrees.  I went with the Eggs Diablo. 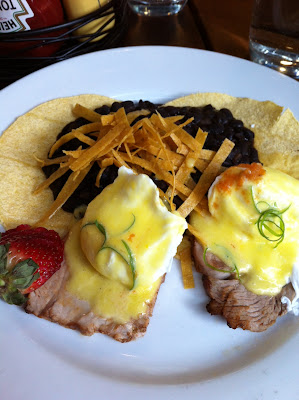 I tend to be more of a savory vs. sweet breakfast sort of person - especially if someone else is making the poached eggs.  I also have a weakness for huevos rancheros, so my eyes was immediately drawn to this on the menu.

The pork was sliced like a slab of Canadian bacon.  Personally, I would have loved to have the pork shredded  carnitas style, as I think this would have added to the overall presentation of the dish.  The eggs were poached nicely and had just the right amount of ooze that I like. The habanero drizzle added a punch of heat.

I ordered a side of the green apple coleslaw to share with the table.  I'm a big fan of coleslaw but this one was just okay.  I couldn't taste the apples and it could have benefited from having more dressing to hold it together. 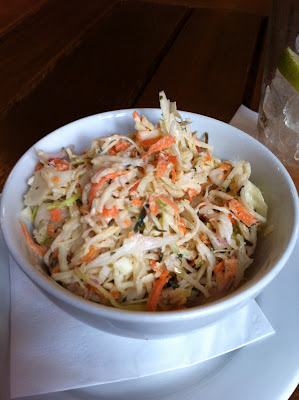 If you are a sweet breakfast person, I'd recommend the Challah Bread French Toast. 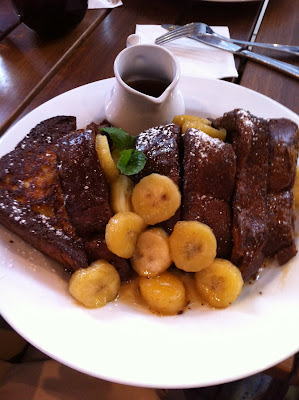 Seriously, how good does that look?  Nice thick slices of toast, warm bananas, and a carafe of maple syrup to douse it in.

After we'd devoured our entrees, our waitress asked us if we'd like some dessert.  After moment of hesitation and thought to determine if our stomachs could handle it, we went for it.

I tried the Grilled Pound Cake with pineapples and whipped cream. 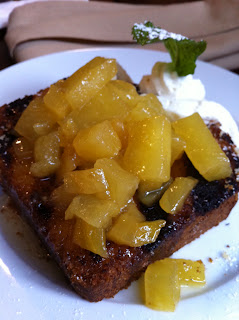 A for presentation, but a B for taste.  The pound cake was drier than I wanted it to be and didn't have that butter pound cake taste that you expect. It was too crumbly that even the moisture from the pineapples did nothing to help.  The flavor was fine but I was disappointed.

As for my brunch buddies, they were all raving about the homemade graham crackers for the S'mores   Many of the dessert items are chocolate-based so if you're into that, you'll be satisfied.  The drunken 3 Musketeers ice cream was deliciously boozy, as if made by Porthos himself. An adult root beer float or milkshake made with it would be something I could get behind.

Bar area is nice, if small. If you're looking for a easy relaxed atmosphere for a pre-movie or pre-theater meal, this is good, moderately priced option.  The service was friendly and prompt.

But you know what the BEST THING about Back Deck is?  Their soundtrack!

Seriously, they played all of my favorite songs out of the 80s & 90s - exactly what I would play at my own back deck parties.  The songs would come on and each time, I would exclaim "This is my JAM!"  It made me quite happy.

Back Deck is located at:
2 West Street, Boston
(corner of West St. and Washington St. in Downtown Crossing)


Note: This meal was provided to the Boston Brunchers free of charge. I was asked to write a review of my dining experience. All of the opinions expressed here are my own.

So sad I missed you! Thanks for the honest and thorough review. I think I could totally get behind that grapefruit.